This fascinating book opens with the anonymous quotation: “In order to survive as a nation people have to truthfully invent falsehoods.”

This reminded me of my own article from April 2013 on “Heritage Histories.” We create false histories to define who we are in superior light – our caste, race, religion, language, schools etc. – and when these are questioned, it is soul wrenching. This is such a book. It is gratifying to have a Sinhalese Emeritus Princeton University Professor laying bare the Sinhalese myths built around the last king of Kandy.

Lankan school texts unflinchingly claim that the Sinhalese came to Sri Lanka as settlers and the Tamils as invaders. Tamils cry foul, but cannot see that we do the same to our minorities – claiming that Muslims are low caste Tamils, that the Tamil Bible was translated by the Hindu Leader Navalar, who taught Tamil at the age of 12 to the actual translator Peter Percival; and that C.W. Thamotharampillai, who discovered some of the oldest Tamil books and whose infant baptism is a matter of record, was a born-Hindu pretending to be a Christian for privileges. Worse, ancient roots are ascribed to the relatively new Sinhalese language by calling Brahmi inscriptions proto-Sinhalese – as absurd as giving English ancient vintage by calling British Roman inscriptions proto-English.

My wife had already read our daughter’s copy with all footnotes. When I got my copy she wanted to re-read it and we literally fought for our turns and finished it in a day. Such is the gripping nature of Gananath’s narrative.

Gananath terms the deposing of SVR as the most momentous event in Lankan history because it marked the end of independence. Nayaka rule begins with the death of the childless Narendrasingha (1707-1739) who had appointed his Nayaka brother-in-law Sri Vijaya Rajasinha as Yuva Raja (sub-king). The Nayakas were warriors from Andhra Pradesh and Karnataka, who had established their empire in Tamil country, especially Thanjavur and Madurai from where the Kandyan kings obtained their royal brides.

The Sinhalese saw the Nayakas as Tamil. SVR’s end is owed to the British demonizing him with a view to invading Kandy on the pretext of freeing the people from tyranny, and the Englishman John D’Oyly using numerous Buddhist monks as his spies to prepare for the invasion. To these Buddhists, the English King was preferred to this so-called Tamil king. The popular account from D’Oyly, “deliberate misinformation from [the traitor] Ahelepola’s Sabaragamuva loyalists,” is the stuff of school texts from my time.

SVR is made villainous in the execution narrative of the wife and children of Ahelepola, who was working with the British against SVR. He, his wife Kumarihami, children and his brother and wife were all sentenced to death. Ahelepola escaped. He could have saved his family by surrendering but failed them. The eldest, 11 years old, clung to his mother, terrified and crying. The second nine-year-old son, stepped forward showing his brother how to die. His head, severed by a sword was put in a rice mortar and the pestle given to the mother to pound it. The infant at the mother’s breast was decapitated. The milk he had drawn flowed mingled with blood. SVR is said to have watched all this with a crowd.

Gananath does not believe any of this, asking how it leaked out. He adds, “Surely not through the king’s executioner, very likely the only witness to the event.” The so-called assembled crowd, Gananath puts down to John Davy the British surgeon’s inventiveness, “from British practices where crowds gathered at executions in a carnival-like atmosphere.”Having passed by an LTTE execution of a “traitor” husband and wife couple at Urumpirai, where ice-cream and gram vendors were gathered and schoolchildren gleefully watched over these treats, I am not so certain the habit was not already introduced by the Dutch as seen from the gallows on the Jaffna Fort ramparts.

Accounts by Sinhalese like the Ahelepola Varnanava, in contrast, says Gananath, lambaste the king as a heretic Tamil while barely mentioning the execution of Ahelepola’s family. The “outrageously anti-Tamil text,” puts Ahelapola in the dynasty of the sun and the moon and says he is like the mystic eagle (Garuda) that destroyed the Tamil serpent. Rather strangely, the Ahelepola Varnanava makes out Ahelapola as the peacock, the vehicle of Muruhan, which made Tamils flee in fear. We see cultural appropriation, as when White people take over the weaker Black people’s symbols especially from Black music, and make Blacks feel they have no culture. Taking over Kadirgamam and calling it Kataragama and the Tamil Buddhist ruins of Kandarodai, renamed Kathurugoda seem similar.

The final capture of the king was guided by D’Oyly and Ahelepola. Molligoda, appointed Disava by the king, betrayed his lord. Several chiefs fled as the British approached. Ekneligoda (“who believed that his chief Ahelepola would soon be king”) and 500 of his supporters from Sabaragamuwa caught the king, reviled him and tied him up with wild creepers. The queens came out “reeling like fowls whose necks had been twisted and blood streaming from the lobes of their ears which had been lacerated in tearing away their earrings. However false, when such stories are internalised by a people, the repeat of similar incidents in successive race riots against Tamils becomes normative.

Interpreter Don William Dias took charge and entreated D’Oyly to come quickly, writing “the Sinhalese king” has fallen into our hands and is being “subject to ill-treatment and ignominy.” He asked for three palanquins (for the king and his two queens) and wearing apparel as the queens were almost naked.

(Is this what happened to Prabhakaran, his family and Isaipriya in Nandikadal?)

Gananath brings out the many positive views of the king, a man of composure and majesty who ruled according to the shastras with a deportment that “indicated considerable dignity and firmness of mind”that could discuss the causes of lightning. Says Gananath, “In my view all these cases of the executions or punishment of prominent chiefs and confiscation of lands [by SVR] were for treason and fully justified under the law.” For almost every matter on which British writers blamed the king, Gananath points to the same thing being the norm for British behaviour – drinking spirituous liquor, having many women, issuing savage punishments to traitors, etc.

Following up on the reference to SVR as “the Sinhalese king,” Gananath notes that the Nayaka kings (except Kirti Sri Rajasinha (1747-1782) “the great Nayaka-Buddhist king”) were born and raised in Kandy. Theywere practising Buddhists who “also believed, as most Sinhala Buddhists did [and do], in the great Hindu gods” such as Vishnu, Skanda and Pattini. Gananath says that some Nayaka queens, born and raised in Madurai, were more passionately Buddhist than most Buddhists, “which of course is true of recent converts.” “It is therefore no accident” that it was SVR who constructed the magnificent site in honour of the Dalada after much of it was burnt down by the British in 1803-4. I might add that if SVR was not the Sinhalese, nor was Vijaya, if at all, he existed. His queens from Madurai, too, were Sinhalese just as many Tamils who have chosen to change identity in recent years are Sinhalese. (It was Gananath who told me, just after 1983 that when a Sinhalese-English dictionary by the Government Press defined the Salagama caste of the Sinhalese as recent Tamil immigrants brought in as cinnamon peelers, a high ranking Buddhist prelate of that caste persuaded J. R. Jayewardene to burn the books and reprint them without the offending reference).

Gananath is an iconoclast who enjoys being that. He is critical of many established writers. He apologises for making the necessary references to caste and treason, and “to the descendants of the aristocrats who live and work in Sri Lanka today.” His defence of his explicit references to caste, I find redeeming because I, too, have found it necessary to identify people by their caste to make the argument that there is discrimination even today, and that oppressed people who rise in the system, once empowered, put down those lower than themselves. He salves the egos of those criticised saying that the good and the bad exist within us all although their behaviour towards their noble and enlightened king who lived by Kandyan Law and forgave many traitors, seems utterly selfish, brutal and venal.

Iconoclastic Gananath cannot resist pointing out that it is a mistake to say “the lion flag was the ‘national flag’ of the Tri Sinhala,” the term Tri Sinhala being “of thirteenth century origin.” He adds, “there was no flag, lion or otherwise, that expressed the collective unity of the three parts of the Tri Sinhala. Such national flags were invented, designed or reshaped only with the advent of the modern European nation state.”

This extremely valuable bookwill enlighten the many who were brought up on nonsensical history books and school texts. It will also bother many authors whose work is questioned, but in very polite and non-confrontational but inexorable arguments cutting to the core of texts from colonial times to now. Worse, it will expose the many families who go as noble Sinhalese but in reality were traitors for having betrayed a just and noble “Sinhalese king,” a Buddhist who like all Sinhalese today, if they trace their ancestry back however they choose, would find they end up in a Hindu somewhere – whether Vijaya the mythical ancestor of the Sinhalese; or Mootha Siva the father of the first Buddhist king of Lanka, Devanambiyatheesan; or the Tamil Buddhists of Kantharodai; or the thousands of Tamils on the western and southern coasts who became Sinhalese in the twentieth century; or the Nagas and Yakkas; or even Ravana.

It is academically and intellectually salutary that Gananath Obeyesekere is, going by the spelling of his name, from the same aristocratic families whose loyalty to the Sinhalese king and uprightness he questions. That adds to the book’s credibility.

This book will promote national unity and reconciliation through greater understanding among all Lankans and help form a truthful and realistic identity. It isa tribute to Gananath Obeyesekere’s wit, sharp mind, noble thoughtsand empathy for the weak. It is most enlightening of our prejudicesand abeautiful thing for any collector to own.

A final compliment to the new publisher, Sailfish:An excellently produced book at an affordable price with the commitment to delve into the controversial. I look forward to more.

Pathways to the Peak is a collaborative effort by mother daughter team Dinusha Panditaratne and Shalini Panditaratne and details the amazing story of pioneering Sri Lankan women. In addition they have generously donated the proceeds of all sales of the book to Sahanaya-National Council for Mental Health and CCC Foundation Sri Lanka to benefit women. It is a wonderful book to have or gift especially to remember Women’s Day. 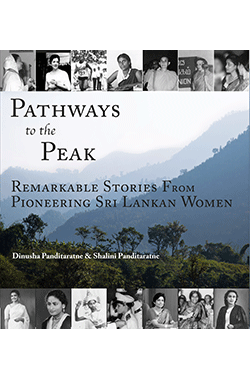